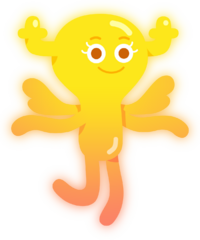 Penny Fitzgerald is a character from The Amazing World of Gumball. She is a living peanut with antlers growing out of her head and, following the events of the episode "The Shell", Gumball's girlfriend. Their mutual affection and incapability of expressing their feelings for one another was a running theme in the series until "The Shell", where Gumball finally directly reveals his feelings for her and they have their first kiss in the woods. In the same episode, it is revealed that underneath Penny's shell lies a yellow, fairy-like inner self which shape-shifts based on her emotional state. Penny's father Patrick, the head of a local construction company, is extremely overprotective of his daughter and does not trust Gumball until he saves her from getting run over by his own car in the episode "The Knights" and "The Shell" for helping his daughter through her emotions. She is a member of the Elmore Junior High cheerleading and synchronized swimming teams.

When Penny finally releases herself from her titular shell, she starts to flee in fear that she might be considered ugly. One of the forms she turns into while running away is a muscular monster, which scares the Wilsons into calling an exterminator.

Gumball asks if Polly was in fact following them the whole time, which Penny sarcastically answers that Polly "used the Force to appear to Gumball as a hologram." Gumball asks Penny for an explanation to that, to which the fairy, enraged, transforms into her minotaur form and yells at him, saying Polly obviously was with the boys.

Retrieved from "https://animatedmusclewomen.miraheze.org/w/index.php?title=Penny_Fitzgerald&oldid=17451"
Categories:
Cookies help us deliver our services. By using our services, you agree to our use of cookies.