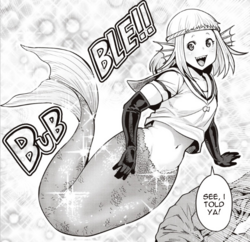 Mero is a character from the manga Pint-Sized Elf. She is a mermaid working as a fish merchant. She eats fish 3 meals a day, and as a result of eating so much of it and not doing a lot of swimming, her arms have become flabby from muscular atrophy.

Naoe and Erufuda were visiting a fish market to expand her eating habits beyond french fries. There, they meet Mero, where on hearing Erufuda's snide remark on her sagging arms, she laments how they became this way because she hasn't been swimming much since she came to the surface and ate a lot of fish in that time. Naoe points out that this sagging is a result of muscular atrophy in the arms, and she could prevent this by training her biceps and triceps. He also mentions that if she works them out too much, the muscle and fat in her muscles would only make the arms bigger, in which we see an image of Mero in her mermaid form with a heavily-built upper body.

Retrieved from "https://animatedmusclewomen.miraheze.org/w/index.php?title=Mero&oldid=7053"
Categories:
Cookies help us deliver our services. By using our services, you agree to our use of cookies.