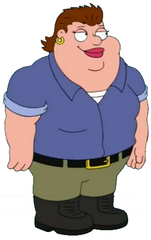 Karen Griffin is the half sister of Peter Griffin, and a pro-wrestler with the stage name "Heavy Flo". She first appeared in "Peter's Sister".

Family Guy: The Quest for Stuff

Retrieved from "https://animatedmusclewomen.miraheze.org/w/index.php?title=Karen_Griffin&oldid=20592"
Categories:
Cookies help us deliver our services. By using our services, you agree to our use of cookies.