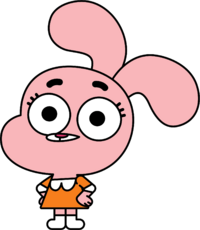 Anais Watterson is one of the main female characters from The Amazing World of Gumball.

She is Gumball and Darwin's precocious 4-year-old sister. She is considered a child prodigy, to the point that she attends Elmore Junior High with her brothers. Gumball resents the fact that she is always telling him what to do, but nonetheless loves her and acknowledges her good intentions. Although impatient with her brother, she often tags along with him on his misadventures as a voice of reason, usually having to help Gumball out of situations caused by these misadventures. She has, however, been shown to not be above manipulating her family to get what she wants. Despite her intellectualism, she still shows typical childlike behavior, including an obsession with the children's television character Daisy the Donkey, and has tried to fit in with Gumball and Darwin on numerous occasions. She attends Eighth grade at Elmore Junior High, which Gumball and Darwin are unaware of due to the "filtering" out anyone or anything that isn't part of their lives.

Anais is a small pink rabbit with a whitetail. She resembles and is smarter than her father, Richard, but she is much shorter in stature and has a more feminine appearance. The inside of her mouth is a darker pink, and her tongue is light pink. Her nose is red like her older brother Gumball. Anais usually wears an orange dress with white trim and white socks. She is one of the only members of the Wattersons to wear footwear

Retrieved from "https://animatedmusclewomen.miraheze.org/w/index.php?title=Anais_Watterson&oldid=6182"
Categories:
Cookies help us deliver our services. By using our services, you agree to our use of cookies.